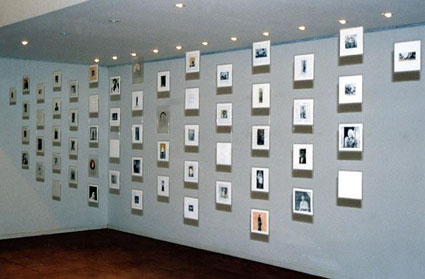 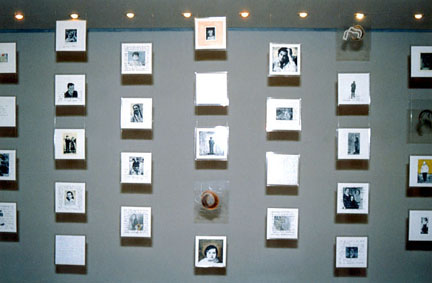 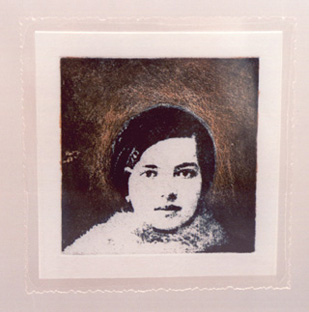 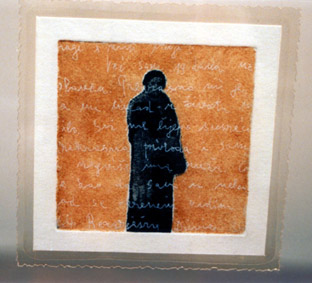 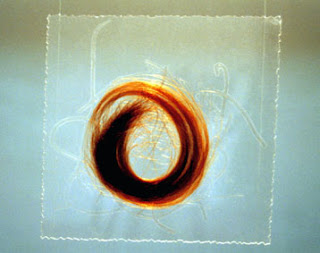 Placed "between" the space of the gallery, the "letters" of Slavica Janešlieva are expressing a conditional issue both of the medium in which she is supposed to produce her works and the concept of this project. Therefore, this project consists an "if" version. If it is based in the graphic print medium, than why the space? If the space is involved in the graphic-print art, than why a curtain-like dispose? If there is a curtain, than what is behind it, what does it cover, what does it hide?
Approaching closer to the small size prints (12cm x 12cm), the viewer is taken, step by step, in the content of these "letters": old photographs, manuscripts, persons, feelings, emotions, memories, distant past. Than, it becomes recognizable that the viewer is, actually, taken not in the physical space, but in the "space" of the artist's personality. The handwritings, the smiles, the size (of the prints) - everything becomes touchable. And in a sadden, the time dimension turns as a relative; on the viewer's backside is the same handwriting placed on the entrance window of the gallery: The viewer is caught in-between the one and the same space of some correspondence between persons of a different time and from a different time. From the other hand the relation "distant versus distance" pushes forward the relativity of the present. Placed between this "distant versus distance", the viewer, with her/his presence, is forced to equalize the different with the same: the distant becomes that is here, the distance becomes that is now, or as Massaccio once wrote: "Where you are I was, where I am you will be", if...
Nebojša Vilic

In her most recent graphic installation the artist Slavica Janešlieva continues to treat her favourite theme: the family. She transforms photographs and letters from the intimate past of her own family into material for the "web" of approximately a hundred miniature prints (12 cm. x 12 cm. each) which hangs and spreads in the middle of the gallery's space. In that way Janešlieva reveals to us not only her curiosity and attachment to her family's history but also her readiness to present it to the public.
The reconstruction of the past of members of the family is not only a chronicle of their partings and travels, but also a long intersubjective "letter" written by the artist herself as an anamnesis of the presences and the absences of particular individuals who communicated with each other inevitably over a spatial distance. Distance in time, on the other hand, enables her to simulate a possible version of the events and the relationships, and even the handwriting of the person who is writing to the one in the photograph or simply the mention of some person in the text intermingle and weave the intertextual polylayeredness and polysignificance of the past, the aromas of which are being pressed, "preserved" for the future. In relation to that which Roland Barthes calls studium - the particular, specific and unexpected (some detail that suggests a whole story) the dramatic charge and tension, the truth about the destiny of all those individuals, not known to us, is being hidden.
Did these letters reach their addressees (not only in a literally but also in metaphorical sense), were they read and understood correctly and accepted with adequate emotions, we are not able to find out. The narration is fragmentized, discontinuous as was the case with the communication itself, as well as the emotions and the relationships of the participants in it. The only certain thing in this project is the subtle visual interplay of the photograph, the photoaquatint and handwriting i.e. the text, and their spatialization as a transparent curtain with two front sides, which hangs between the past and the future.
Suzana Milevska


Posted by Slavica Janeslieva at 1:45 PM