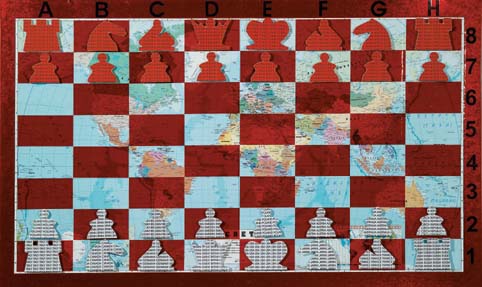 ...Janešlieva’s most recent project, one of her series of committed projects, is entitled The Game (2005). The game she has chosen this time is chess again — one of her favorite (symbolic) playthings she also used in her other projects. In this particular case, however, the artist offers a real game — a specific, already completed game of chess with a known outcome. There is only a “slight” ironic/sarcastic artistic intervention in that identified game: the pieces bear the names of individual countries. According to some mysterious code similar to that of Nostradamus or according to her own logic of a “global strategist,” Janešlieva has given the pieces the names of the world’s major powers and also of many smaller countries known to us all as the world’s crisis spots. But as an artist and a “strategist”, Janešlieva endows herself with another advantage: in her arrangement of the game, the real power of the countries rarely corresponds to the power of the chosen pieces in chess. (In other areas of life, such an arrangement would probably cause a series of diplomatic incidents.) In this game of international and global positioning, countries gain or lose their power according to completely new, artistic parameters. Some abandon the “historical scene” unexpectedly quickly... will they manage to survive? Of course, the game has to be played to the end to find out who is “the toughest”. And if you don’t like this ending, then imagine yourself as a strategist and invent your own game, guided by your own parameters!...
Zlatko Teodosievski
excerpt from the text in catalogue "Slavica Janešlieva", 2005


Posted by Slavica Janeslieva at 2:27 PM