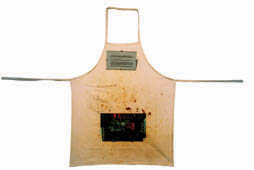 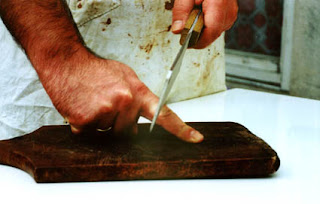 A year ago I had repaired the chest that was in our basement since I know about myself. Now, since it looks nice and for me is an antique of a personal value it has a prominent place in my own apartment. I thought that this chest had been used for the dowry of my grandmother, but I was wrong. This particular chest is a soldier's chest and it used to belong to my great-great-grandfather Bela. Bela was a butcher. He lived in Senj, Croatia. I don't know much about him and his life except this story and the fact that he married twice. My great-grandmother and her two sisters were his children from his first marriage. During the numerous Balkan wars many healthy men were recruited as soldiers. Bela was one of them. After the first war in which he took part, after certain period he was called again to join the army. But he didn't want to go to war any more. So, he made a decision and believed it was a good and a worthy one. Being a butcher, he knew the best way to carry it out. And one day he did it. He cut his right hand point finger off, the one he used to pull the trigger with. Without that finger he was useless for the army and they never called him again. I guess he must have been happy not to have to fight anymore, but I don't know how he felt afterwards without his finger. I don't think my grandma knows either. She only told me this story.
Posted by Slavica Janeslieva at 11:36 AM