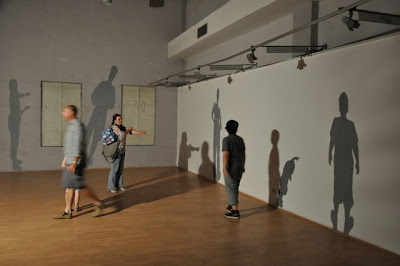 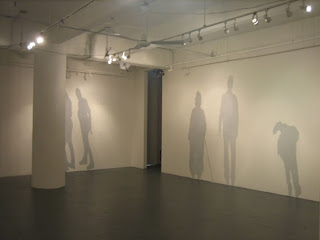 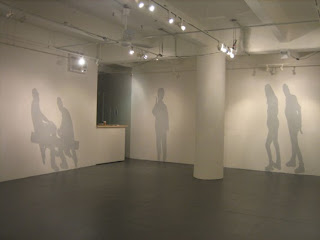 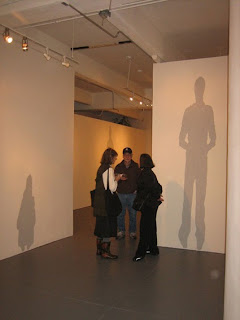 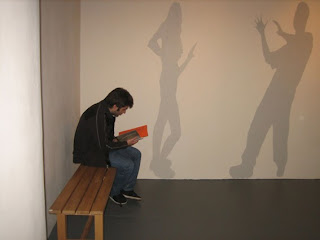 ‘Shadow’ represents a personal perception of the present, of the times we live in, here and now, of the relations between power and submissiveness, of the intellect, of creativity and intellectuality. Is my own perception of reality true or not? Is that also the reality of the visitor? Is there only one reality?

Can we speak of power when something is enforced or is it power to achieve a specific reaction using a (threatening) behaviour?  On one view, power represents the action to create, i.e. to influence certain behaviour.  Light creates the shadow, hence we can view light as power, but also as knowledge.  Fuco argues that ‘power is knowledge’.

The relationship between the elements of the shadow, the light and the projected image of the object, can be used as a valid metaphor for the individual, the collective, or the society we live in, as well as for their correlation with power and knowledge.  However, we need to also remember that passivity (lack of response) is also influenced by power.

According to Jung, the shadow, or ‘the aspect of a shadow’, is part of the subconscious and includes within the suppressed weaknesses, faults, shortcomings and instincts.  The shadow is both instinctive and irrational, but also susceptible to projections: turning its own inferiority into a visible (an apparent) moral drawback within another individual.

The shadow represents the distant, primitive and indiscriminate aspect of the mind. The appearance and the role of the shadow largely depend on the life experience of the individual, however, some followers of Jung believe that the shadow, despite the fact that it is personal, it is also the shadow of society, nurtured and deprived by the suppressed collective values.

The other important aspect of the shadow (in literature, theatre, fine arts), is the presumed link between the shadow and the night, the darkness.

Under the surface, a person suffers from excessive boredom.   The boredom makes everything seem hopeless and empty...as if the initial confrontation with oneself casts a dark shadow before time.

People have an intuitive connection with their shadows.  Perhaps the shadow helps us map our body in space and guides us in defining our role.

When people try to see their shadow, they become aware (and usually ashamed) by the very characteristics and impulses they negate within themselves; yet features they painfully realise in others – such as egoism, mental laziness and weakness, some unreal fantasies, schemas and scripts, negligence and cowardice, excessive greed for money and all things material...

The shadow can represent the whole truth, part of the truth, or it may not be true at all.  It makes the existence and the presence immortal, portraying them as a picture-image.  It captures fraction of a moment, and (just like the photograph) it makes it eternal.   I understand it as a surrogate, as a substitute for the real person, for the body, mind and soul.  It represents my attitude towards the world around me.  The true versus the false, or, as Socrates said ‘enlightening or unenlightening’.  It has the power not only to create illusion and thus to deceive us, but also to educate us.  From the illusion, it can create an alternative reality, or rather, it can turn the illusion into reality.

Through the representations of the shadow, I am able to disrupt the perceptions and the generally accepted truths and to allow the visitors to see a different truth.  In other words, to turn the invisible into visible.  To uncover the veil which is typical of psychology, culture and the pressures from society.

Notwithstanding, the interpretation of this art work requires personal and very subjective interpretation or interaction with the cognitive process of the individual – the visitor.  My purpose it to ‘lure’ the visitor into the installation.  When they enter the space where the shadows are depicted, they become one with the art work, and create their own shadow.

Email ThisBlogThis!Share to TwitterShare to FacebookShare to Pinterest
Labels: Installation