Smoking Can Sometimes Save Your Life, 2000 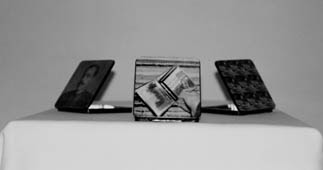 My great-grandfather Dino was a "komita" (In the 19th and early 20th centuries komita was a person fighting for the rights of the Macedonians and the independence of their country).
He spoke 4 languages (besides Macedonian, he spoke French, Greek and Turkish), and he was a good hearted and a hardworking person.
Once my father told me that he could still visualize him as clearly as when he stood in front of him, mounted on a horse, waving good bye. That was the last time he saw him.
This story took place much earlier, when my great-grandfather Dino was young and fighting the enemy. As a komita, he once got captured by the Turkish soldiers (Macedonia was under Ottoman rule for five centuries). They were taking him to the person who had ordered his arrest and wanted him questioned and then executed. Dino didn't know what was going to happen to him. Accidentally or intentionally he dropped his tabakera (cigaret-case) and asked the soldiers (in Macedonian) to pick it up for him. (He didn't reveal to them that he knew Turkish.) They gave him his tabakera back, laughing and saying in Turkish: "If he knew where we are taking him, he would know he doesn't need it anymore!".
So, my great-grandfather Dino put the two and two together. He knew he had to make an attempt and escape.
When, for a while, they sat under a tree to get some rest, Dino somehow managed to run away. The soldiers quickly fired many shots at him. Three bullets did reach him, but he did not get killed. After some good care and nursing he got well again.
My grandmother says that whenever her mother was cross and mad at him, she used to yell: "Oh, you are impossible. Why on earth didn't those three bullets kill you!"
Posted by Slavica Janeslieva at 11:07 AM